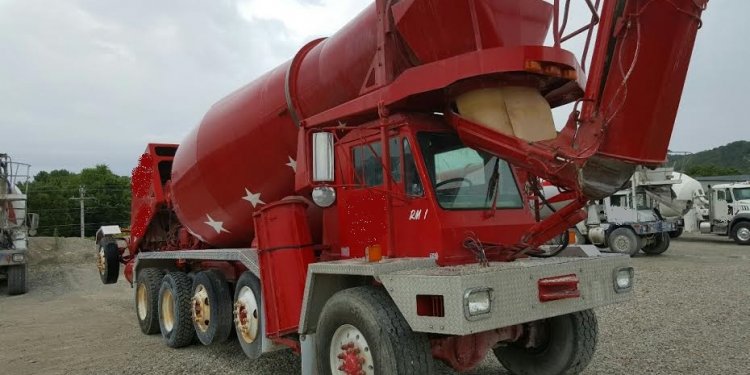 Stephen Stepanian developed and applied to patent the first motorized transit mixer in 1916, in an effort to replace the horse-drawn concrete mixer used at the time. Wooden paddles churned the mixture as the cart wheels turned, but the design was of limited use - it was cumbersome and slow. The same, however, could be said of the engines and trucks during that period. But by the 1940s, engines and truck-frame construction caught up to the need for a rugged vehicle capable of hauling thousands of pounds of wet, or unset, concrete. As the building boom following World War II went into full swing, mixer trucks came into their own.

The large drum mixer seen on roads today hasn't changed much from Stepanian's vision of a better concrete hauler. Mobile transit mixers are a mix-and-match selection of engine, truck frame and rotating mixer. The mixer is similar, though larger in scale, than the smaller ones found on construction sites. A large motor, separate from the engine, rotates the drum on the truck body, and a series of blades or a screw powered by the same motor keeps the aggregate, water and cement in constant motion. This keeps the premixed concrete from setting, though the clock is often ticking to get the load to the construction site, road section or parking lot. Most cement manufacturers suggest keeping the time between mixing and pouring to 90 minutes at most. It's even better to get it to the site in less than an hour.

As technology has changed, so has the basic mixer design. While many transit mixers still have rotating drums, most don't simply pick up a load of wet cement and transport it. The few that still do head mostly to road sites where it's possible to pour the mixture immediately.

Most transit mixers have a separate water tank in the truck. The spinning drum keeps the dry ingredients, aggregate and cement mixing during most of the trip. When the driver is within a few miles of the site, water is added to create concrete fresh for delivery.

This is considered "batch" delivery of ready-mixed concrete, mixing ingredients off site and trucking them where they're needed. Advances in technology have made it possible to mix concrete at the job site, though transit mixers are still the workhorse of the field.

Volumetric and metered mixers are becoming more common. Both types are essentially on-site custom concrete plants. Separate holding tanks of aggregate, cement and water are contained in one truck with a computer hooked to augers and pumps. At the site, the customer can order a specific type of concrete (there are more than a dozen) that can be mixed by the truck.