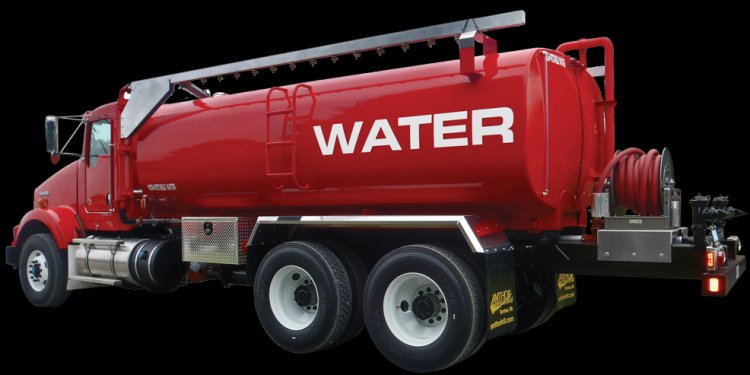 At first only a few tendrils of smoke snake out of the dense underbrush and then quickly disappear in the cold, gusty winds of the exposed ridgeline. It doesn’t take long, however, for the smoke to thicken to the point where the oak trees are obscured and thick waves of dark gray are rolling across a nearby clearing.

Like the bugle of the cavalry, the roar of an International® WorkStar® fire truck announces itself: It’s coming to the rescue. Bursting from little more than a goat path on the side of the mountain, the red Los Angeles County Fire Department (LACoFD) engine confronts the thick smoke head on, spraying a powerful stream of water from a nozzle just above its front bumper.

Captain Gary Black, an engineer and firefighter, jumps from the double cab and within a couple of minutes has the hoses hooked up and ready to saturate the area.

That’s when the smoke machine is turned off.

Outside the perimeter of the fire drill, nearly a dozen onlookers from the LACoFD, Navistar and Kovatch Mobile Equipment (KME) applaud Captain Black, his crew and, especially, one of the most unusual additions to the department’s 1, 700 fire-fighting vehicles: The audience has gathered to see LA County Fire Engine 55 do its stuff.

Chief Craig Weeks, who is in charge of the fleet that covers 2, 300 square miles of both intensely urban spaces and remote wild lands watched over by 170 fire stations, especially enjoys the truck’s performance. It was he who took suggestions from Captain Black’s predecessor, translated them into specifications, and put them out for bid.

The specs raised a lot of eyebrows, and more than one TEM told Chief Weeks that the vehicle he wanted couldn’t be built. Weeks, a calm, confident man who knows his business, asked them in return, “Do you mean it can’t be done, or you’ve just never done it before?”

What the LACoFD wanted was a Type 3 vehicle with a significantly increased water capacity to serve the most unique and challenging station under its command, a station separated from the mainland by 22 miles of Pacific Ocean.

Santa Catalina Island is a deceptively wild and untamed place. The 74-square-mile island is widely known for picturesque Avalon village, its casino and popular harbor. But inland are vertical peaks rising up to 1, 600 feet and narrow canyons and arroyos that are barely accessible by foot. Dry grasslands and the infamous Channel Island winds can be a deadly combination. In 2007, a construction crew accidentally set off a blaze that burned 4, 000 acres and virtually surrounded Avalon. A total conflagration was barely averted by a massive response from the mainland LACoFD.