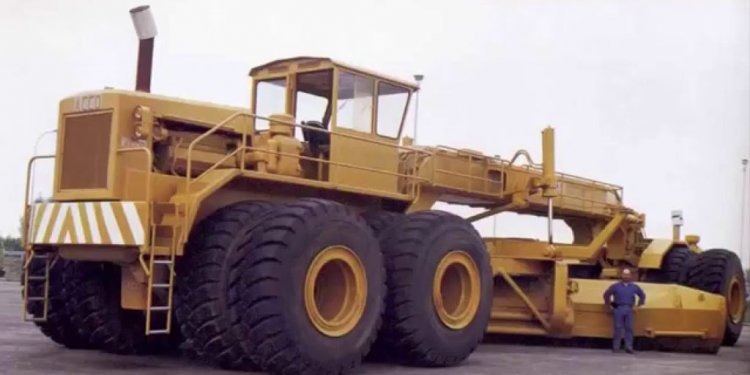 Free specifications for all classes of equipment

2005 Caterpillar 160H VHP Plus Motor GraderA motor grader, also known as a road grader, patrol, or maintainer, is a piece of heavy machinery used to create a smooth, wide, flat surface. Traditionally, the grader is used for road maintenance—its main function is to flatten surfaces before the application of asphalt. Presently, these machines are also commonly used for fine grading, spreading, and earthmoving. They can be used for clearing debris and brush, as well as for snow removal. A variety of attachments convert the motor grader into a more versatile machine, enabling the machine to do things such as dig shallow holes. The attachment of an elevating conveyor enables the machine to take loose material from the trailing end of its blade, elevate it, and cast it into a hauling unit.

In the early years of roadbuilding, graders were pulled by a team of oxen, mules, or horses. The first such grader was invented by J.D. Adams. In 1885, Adams introduced the “Little Wonder”—a small, two-wheel, horse-drawn grader with a blade set at a fixed angle. It was capable of angling its wooden wheels to one side. Closely following this development, all other grader manufacturers began to incorporate the leaning wheel principle. This development led the way for the introduction of the Adams’ Road King in 1896. This model was a four-wheel, all-steel grade with an eight-foot blade, and wheels capable of leaning in either direction. By the early 20th Century, steam tractors, and then crawler tractors, were pulling graders.

The industry’s first self-propelled (motor) grader was developed by the Russell Grader Manufacturing Company in 1919; it was introduced as the Motor Hi-Way Patrol No. 1 in 1920. This model used a modified Allis-Chalmers tractor. Subsequent versions would be modified on tractors by other manufacturers, such as Fordson, Cletrac, and McCormick Deering. Shortly after this development, all manufacturers started to include self-propelled versions of graders in their product lines.Caterpillar purchased Russell Grader Manufacturing in 1928 and, as a result of this acquisition, entered the grader market. The same year, J.D. Adams introduced its first self-propelled grader, known as the No. 10. Over time, larger models were given power controls.

On early machines, grader blades were controlled by hand cranks, racks and pinions, which were primarily operated by wheels in the operator’s station. By the 1920’s, manufacturers began developing power controls. Most of these were powered mechanically; however, some were hydraulic, such as those introduced by Galion and Huber. Only after many decades did manufacturers begin manufacturing hydraulic, rather than mechanical, controls. By 1935, J.D. Adams had introduced an improved mono-frame grader with a blade able to extend sideways for trimming banks and shoulders.

Historically, graders have been integral in surface mining—the largest models are used for these applications. In the 1950s and 1960s, massive motor graders were being manufactured to reclaim spoil piles—excavated topsoils or subsoils that were removed during construction. In addition, these large motor graders were used to maintain roads for the largest off-highway trucks.

Over the past half-century, many grader manufacturers have developed large sized graders to add to their product lines. Large graders do not typically sell in big numbers and when they do, it is for a limited amount of time. The large motor grader trend, however, began with the Galion Iron Works Manufacturing Co.’s production of the T-700 model in 1955. This grader set a size record at the time, weighing in at over 40, 000 pounds (18, 143 kg), with 190 horsepower. The massive model also included powershift transmission, with a torque-converter-drive. Galion later became a division of Dresser Industries Inc. In 1988, Dresser embarked on a joint venture with Komatsu, whose largest grader to date, the GD825A-2, weighs 58, 250 pounds (26, 421 kg) and has 280 horsepower.

In 1969, another massive motor grader, the double-articulated Autoblade, was introduced by CMI Corporation. This machine was 40 feet (12 m) long, weighed 65, 000 pounds (29, 484 kg), and contained a power module at both ends. Each module contained a 225 horsepower diesel engine using hydrostatic power. Each engine drove four wheels, making it an eight wheel drive machine. This model, whose cab could rotate 180 degrees in either direction, was capable of precision grading in paving jobs.