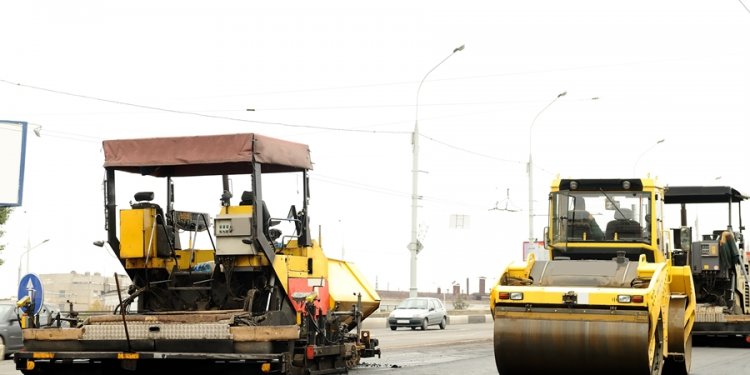 Asphalt is a heavy, dark brown to black mineral substance, one of several mixtures of hydrocarbons called bitumens. Asphalt is a strong, versatile weather and chemical-resistant binding material which adapts itself to a variety of uses. Asphalt binds crushed stone and gravel (commonly known as aggregate) into firm, tough surfaces for roads, streets, and airport run-ways. Asphalt, also known as mineral pitch, is obtained from either natural deposits such as native asphalt or brea or as a byproduct of the petroleum industry (petroleum asphalt). Prehistoric animal skeletons have been preserved completely intact in natural asphalt deposits, one of the most famous being the La Brea Tar Pits in Los Angeles, Califomia.

Asphalt is one of the world's oldest engineering materials, having been used since the beginning of civilization. Around 6000 B.C. the Sumerians had a thriving shipbuilding industry that produced and used asphalt for caulking and waterproofing. As early as 2600 B.C. the Egyptians were using asphalt as a waterproofing material and also to impregnate the wrappings of mummies as a preservative. Ancient civilizations widely used asphalt as a mortar for building and paving blocks used in temples, irrigation systems, reservoirs, and highways. The asphalts used by early civilizations occurred naturally and were found in geologic strata as either soft, workable mortars or as hard, brittle black veins of rock formations (also known as asphaltic coal). Natural asphalts formed when crude petroleum oils worked their way up through cracks and fissures to the earth's surface. The action of the sun and wind drove off the lighter oils and gases, leaving a black residue. Natural asphalts were extensively used until the early 1900s. The discovery of refining asphalt from crude petroleum and the increasing popularity of the automobile served to greatly expand the asphalt industry. Modern petroleum asphalt has the same durable qualities as naturally occurring asphalt, with the added advantage of being refined to a uniform condition free from organic and mineral impurities.

Most of the petroleum asphalt produced today is used for highway surfacing. Asphalt paving material is a dull black mixture of asphalt cement, sand, and crushed rock. After being heated, it is dumped out steaming hot onto the roadbed, raked level, and then compacted by a heavy steamroller. Asphalt is also used for expansion joints and patches on concrete roads. Airport runways, tennis courts, playgrounds, and floors in buildings all use asphalt as well. Light forms of petroleum asphalt called road oils are sprayed on roadways to settle dust and bind gravel. Another major use of asphalt is in asphalt shingles and roll roofing, which usually consists of felt saturated with asphalt. The asphalt helps to preserve and waterproof the roofing material. Other applications for asphalt include the following: waterproofing tunnels, bridges, dams and reservoirs; rustproofing and sound-proofing metal pipes and automotive under-bodies; and soundproofing walls and ceilings.

The raw material used in modern asphalt manufacturing is petroleum, which is a naturally

occurring liquid bitumen. Asphalt is a natural constituent of petroleum, and there are crude oils which are almost entirely asphalt. Oil wells supply the crude petroleum to the oil refineries, where it is separated into its various components or fractions.

Crude petroleum is separated into its various fractions through a distillation process at the oil refinery. After separation, these fractions are further refined into other products which include asphalt, paraffin, gasoline, naphtha, lubricating oil, kerosene, and diesel oil. Since asphalt is the base or heavy constituent of crude petroleum, it does not evaporate or boil off during the distillation process. Asphalt is essentially the heavy residue of the oil refining process.