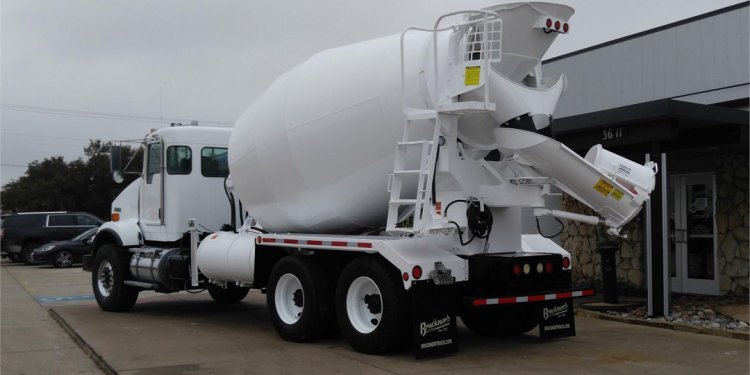 Truck mixers are the most common mode of PCC transport. They consist of a truck-mounted drum that rotates on an inclined axis. A typical mixing truck (Figures 1 and 2) uses a 6.9 – 9.2 m3 (9 – 12 yd3) mixing drum, the size being limited due to gross vehicle weight of the loaded truck. When used to transport truck mixed PCC, drums can be filled to a maximum of 63 percent of their total volume. When used to transport central mixed PCC, drums can be filled to a maximum of 80 percent of their total volume (AASHTO, 2000). Generally, ready mixed concrete producers, load their trucks with a quantity at or near the rated mixer capacity (NRMCA, 2002). Mixing drums contain helical blades on their inside walls that are designed to push PCC to the bottom of the drum when rotated in the “mixing” direction and out to the discharge point when rotated in the opposite, or “discharge” direction. Most truck mixers discharge to the rear, however, front discharging truck mixers are gaining in popularity because the driver can drive directly onto a site and mechanically control the positioning of the discharge chute without the help of contractor personnel (NRMCA, 2002). Discharge is typically via a 3 – 6 m (10 – 20 ft.) chute. Truck mixers use revolution counters to keep track of total drum revolutions and may also be equipped with slump meters (usually accurate to about 12.5 mm (0.5 inches)) and digital water meters to monitor water usage (ACPA, 1995).

Drum rotation (Video 1) is used for two purposes: mixing and agitation. High speed rotation (on the order of 12 – 15 rpm) is used to mix PCC ingredients into a homogenous material. This type of mixing typically takes between 50 and 100 revolutions depending upon PCC characteristics and environmental factors. After this period of mixing, the PCC is usually required to meet at least 5 of the 6 homogeneity specifications listed in Table 1. Samples for these specifications should be taken from widely separated portions but should also come from the middle 15 – 85 percent of the load so as not to be influenced by beginning and end of load abnormalities.

Low speed rotation (about 2 rpm) is used to agitate the PCC to (1) maintain its homogeneity and (2) prevent slump loss while in transit. Truck mixers are equipped with a revolution counter to help maintain tight control over the total number of drum revolutions. Mixing, which is generally short in duration, is usually planned for a specific time or place. If not mixing, truck mixers usually operate in the low speed agitation mode. Mixing is typically done using one of the following three methods (NRMCA, 2002):

In general, short times between mixing and placement can better avoid the problems of premature hardening and slump loss that result from potential delays in transit. Regardless of the mixing mode, PCC is a perishable construction material. First, if it begins to set before being placed and consolidated it is of little use. Second, if it is mixed and agitated excessively it can loose its air entrainment or the effects of certain admixtures can diminish. Therefore, a typical specification will require that ready mixed PCC delivered to the paving site meet the following criteria:
Source: www.pavementinteractive.org