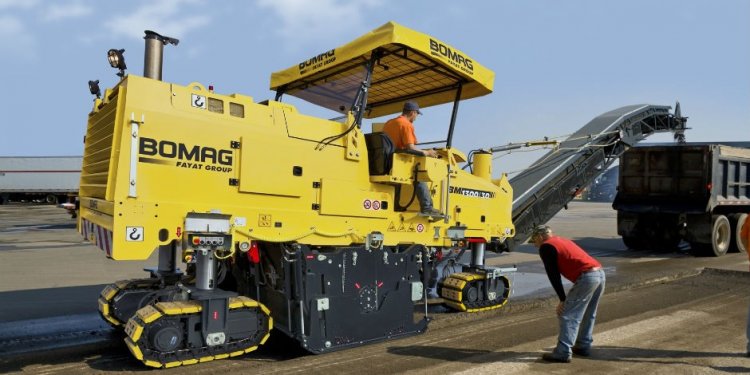 The slabbing miller, Fig. 225, is of the planer type, the cross-rail carrying a rigidly supported cutter, while the table has the comparatively slow feed required for milling. This type of machine is especially valuable where broad surfaces are to be machined on pieces of work which are of such shape that they can be readily and uniformly supported to withstand the cut.

Necessary to Keep Work True. In order to produce true work by heavy milling, it is not only necessary that the work shall be supported as already outlined, but also that the cut be nearly uniform in depth and width. If the section of the cut varies greatly, or, even with uniform cut, if the work is irregularly supported, the metal will spring under the influence of the cutter, and it will be found that the work is not true. Therefore, work of a character that from its shape is especially liable to be distorted by the process of milling, may be machined to better advantage by the process of planing.

It is often desirable, from the point of view of economy of time, to combine the operations of milling and planing, and, with this end in view, milling attachments are made for the planer in a single machine, Fig. 227, and attached to the cross-rail. The changes required from the planer drive, are an extra belt to rotate the cutter, and a special countershaft to slow down the movemerit of the table. This attachment can carry a slabbing, gang, or formed cutter on an arbor for horizontal milling; or it can carry end mills, Fig. 228, by turning the attached head through 90 degrees, thus bringing the spindle to a vertical position. This last arrangement of the spindle is of great utility, as it allows cutters to reach down into places which would be inaccessible by any other means. Vertical Milling Machines. Vertical Head on Horizontal Machines. The advantages of the vertical milling spindle are so

Courtesy of Brown and Sharpe Manufacturing Company, Providence, Rhode Island evident that nearly all makers of horizontal machines furnish what is called a vertical head, Fig. 229. This vertical head is very rigidly supported on the column by means of the overhanging arm, so that cuts can be taken of as great depth as with the horizontal spindle. The vertical spindle can also be turned in the vertical plane, so that an end mill can be used at any angle with the table.

There are several machines made in which the vertical spindle alone is employed, Fig. 230, there being no provision for a horizontal spindle.