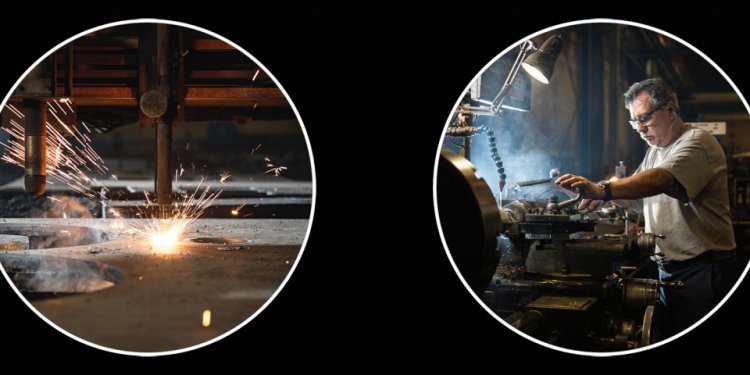 Abnormal Operating Conditions:
Environmental conditions that are unfavorable, harmful or detrimental to or for the operation of a hoist, such as excessively high (over 100 F.) or low (below 0 F.) ambient temperatures, corrosive fumes, dust laden or moisture laden atmospheres, and hazardous locations.

Adjustable or Variable Voltage:
A method of control by which the motor supply voltage can be adjusted.

Automatic Crane:
A crane which when activated operates through a preset cycle or cycles.

Auxiliary Hoist:
A supplemental hoisting unit, usually designed to handle lighter loads at a higher speed than the main hoist.

Auxiliary Girder (Outrigger):
A girder arranged parallel to the main girder for supporting the platform, motor base, operator’s cab, control panels, etc., to reduce the torsional forces such load would otherwise impose on the main girder.

Bearing Life Expectancy:
The L-10 life of an anti-friction bearing is the minimum expected life, hours, of 90 percent of a group of bearings, which are operating at a given speed and loading. The average expected life of the bearings is approximately five times the L-10 life.

Box Section:
The rectangular cross section of girders, trucks or other members enclosed on four sides.

Brake:
A device, other than a motor, used for retarding or stopping motion by friction or power means.

Branch Circuit:
The circuit conductors between the final overcurrent device protecting the circuit and the outlet(s).

Bridge:
That part of an overhead crane consisting of girders, trucks, end ties, walkway and drive mechanism which carries the trolley and travels in a direction parallel to the runway.

Bridge Conductors:
The electrical conductors located along the bridge structure of a crane to provide power to the trolley.

Bridge Rail:
The rail supported by the bridge girders on which the trolley travels.

Bumper (Buffer):
An energy absorbing device for reducing impact when a moving crane or trolley reaches the end of its permitted travel, or when two moving cranes or trolleys come into contact.

Cab-Operated Crane:
A crane controlled by an operator in a cab located on the bridge or trolley.

Camber:
The slight upward vertical curve given to girders to compensate partially for deflection due to hook load and weight of the crane.

Capacity:
The maximum rated load (in tons) which a crane is designed to handle.

Clearance:
Minimum distance from the extremity of a crane to the nearest obstruction.

Contactor, Magnetic:
An electro-magnetic device for opening and closing an electric power circuit.

Controller:
A device for regulating in a predetermined way the power delivered to the motor or other equipment.

Counter-torque:
A method of control by which the motor is reversed to develop power to the opposite direction.

Cover Plate:
The top or bottom plate of a box girder.

Cross Shaft:
The shaft extending across the bridge, used to transmit torque from the motor to bridge drive wheels.

Cushioned Start:
An electrical or mechanical method for reducing the rate of acceleration of a travel motion.

Dead Loads:
The loads on a structure, which remain in a fixed position relative to the structure. On a crane bridge such loads include the girders, footwalk, cross shaft, drive units, panels, etc.

Deflection:
Displacement due to bending or twisting in a vertical or lateral plane, caused by the imposed live and dead loads.

Diaphragm:
A plate or partition between the opposite parts of a member serving a definite purpose in the structural design of the member.

Drive Girder:
The girder on which the bridge drive machinery is mounted.

Dummy Cab:
An operator’s compartment or platform on a pendant or radio controlled crane, having no permanently mounted electrical controls, in which an operator may ride while controlling the crane.

Dynamic Lowering:
A method of control by which the hoist motor is so connected in the lowering direction, that when it is overhauled by the load, it acts as generator and forces current either through the resistors or back into the line.

Eddy-Current Braking:
A method on control by which the motor drives through an electrical induction load brake.

Efficiency of Gearing and Sheaves:
The percentage of force transmitted through these components that is not lost to friction.

Electric Overhead Traveling Crane:
An electrically operated machine for lifting, lowering and transporting loads, consisting of a movable bridge carrying a fixed or movable hoisting mechanism and traveling on an overhead runway structure.

Electrical Braking System:
A method of controlling crane motor speed when in an overhauling condition, without the use of friction braking.

End approach:
The minimum horizontal distance, parallel to the runway, between the outermost extremities of the crane and the centerline of the hook.

End tie:
A structural member other than the end truck which connects the ends of the girders to maintain the squareness of the bridge.

Fail-safe:
A provision designed to automatically stop or safely control any motion in which a malfunction occurs.

Field wiring:
The wiring required after erection of the crane.

Fixed axle:
An axle which is fixed in the truck and on which the wheel revolves.

Floor-Operated Crane:
A crane which is pendant controlled by an operator on the floor or an independent platform.

Footwalk:
The walkway with handrail and toeboards, attached to the bridge or trolley for access purposes.

Gantry Crane:
A crane similar to an overhead crane except that the bridge for carrying the trolley or trolleys is rigidly supported on two or more legs running on fixed rails or other runway.

Girders:
The principal horizontal beams of the crane bridge which supports the trolley and is supported by the end trucks.

Ground Fault:
An accidental conducting connection between the electrical circuit or equipment and the earth or some conducting body that serves in place of the earth.

Hoist:
A machinery unit that is used for lifting and lowering a load.

Holding Brake:
A brake that automatically prevents motion when power is off.

Hook Approach:
The minimum horizontal distance between the center of the runway rail and the hook.

Hydraulic Brake:
A brake that provides retarding or stopping motion by hydraulic means.

Idler Sheave:
A sheave used to equalize tension in opposite parts of a rope. Because of its slight movement, it is not termed a running sheave.

Impact Allowance:
Additional hook load assumed to result from the dynamic effect of the live load.