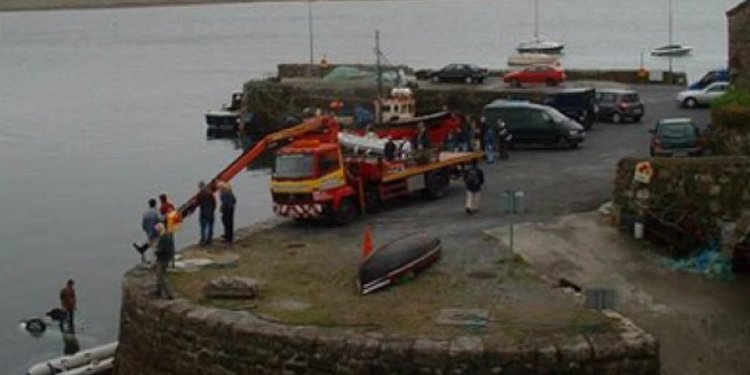 Well, the only thing I figured out was the horrible day those people were having, what
with the tow trucks (2) ending in the drink along with the original car. But I think you
are saying there is something fishy about the photographs?
Mary Grindol, Gaylord, MI

Nothing, if they are trying to create an artificial reef! Marilyn, Grand Rapids, MI

The fact that both cranes were working way off their load charts leads me to believe
the drivers were not certified crane operators. Mike Williams, Los Angeles, CA

Looks like it was topsy turvey. Cranes not big enough to do lifting. Too close to the
edge. Roland Kantz, Lafayette, IN

The shadows never moved even though it must have taken a long time. Some of the
people didn't move from frame to frame and weren't even watching the action. Do you
know a man who won't watch heavy machinery, especially if it's tipping over? Some
of the pics looked "photoshopped"-with features blurred to hide them. The other
vehicles never moved during that whole time. Marilyn, Grand Rapids, MI

The only thing I can say about #6 is that I believe after close examination that it was
created in the darkroom from an actual photograph. There appears to be too much
similarity between #4 and #6. Jim Hills, Houston, TX

The last photo has been manipulated/doctored. One dead giveaway is the shadow of
the light or mirror (driver's side) on the green truck. It's in exactly the same spot as the
previous picture. The light source is coming from above and a little to the right. If
that's the case then the shadow of the light or mirror on the picture below (the last
picture) would have been at a far different angle, logically the light source on the last
photo would have to be coming from above and to the left a bit.

The event took place in Dock Street, Roundstone, County Galway on a Saturday accident. The first rescue vehicle is “Walsh’s Recovery” and is not up to the job, or
perhaps its operators are too dim to have deployed the outriggers if there were any.
The second rescue vehicle is Michael Long “Truck & Crane Hire” with right hand
drive, but European registration plates. No police or Gardai appear to be present during
the recovery. The blue van in background is identified as “Redmond Brothers” a local
building firm.

The final picture (#am) is an edited spoof. Here is the evidence:

The white Zodiac is seen along side the red fishing boat in pictures #ac, ah, ai, aj and am
is missing from picture #am. If it sailed before the Michael Long Truck & Crane Hire
truck arrives in pictures #ak, it would have had to return to its identical mooring before
the final alleged disaster.

The placement of the people in picture #aj indicated that this was the frame used as the
background from which to edit the final alleged disaster . . . much to the detrimental