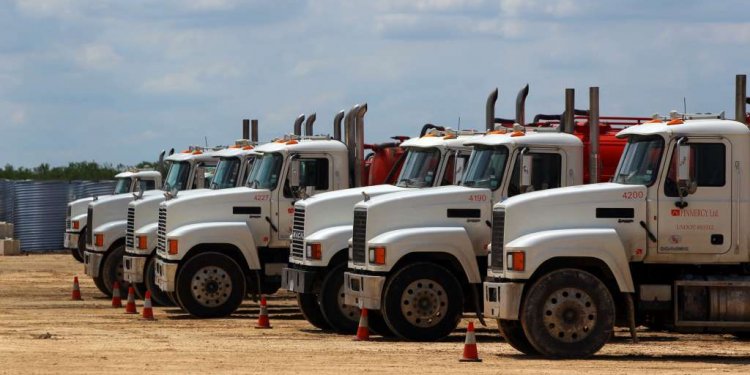 Studies say that fracking consumes less than 1 percent of the total water used statewide, far less than agriculture or even watering lawns. But in some drilling hotbeds like Dimmit County, the proportion of water used for fracking has reached the double digits and is growing along with the oil boom. Companies are springing up to offer recycling, and some drillers are able to use brackish water, but those technologies are often not cost-effective.

Oil and gas companies are “in the spotlight right now, ” said state Rep. James Keffer, R-Eastland, the chairman of the Texas House Energy Resources Committee. Because drillers have increased their water use only recently, he said, “they have to prove themselves a little harder than others at this point in time.”

In 2011, only about one-fifth of the water used in fracking came from recycled or brackish water, according to a recent study prepared by the University of Texas at Austin’s Bureau of Economic Geology and financed by the Texas Oil and Gas Association.

The industry is “absolutely not doing enough” to reduce water use, said Luke Metzger, the director of the group Environment Texas.

In a typical fracking job, water blended with lesser volumes of sand and chemicals is pumped down a well to release oil or gas trapped in the pores of hard rock. The use of chemicals has stirred fears of spills and contamination, especially because companies keep some of the chemicals secret.

Increasingly, the spotlight is also on water supply problems. Some of the most oil-rich parts of Texas, including the Eagle Ford Shale and the Permian Basin, are also some of the state’s driest areas. Carrizo Springs, in the heart of the fast-developing Eagle Ford, averages 21 inches of rainfall a year.

In 2011, Texas used a greater number of barrels of water for oil and natural gas fracking (about 632 million) than the number of barrels of oil it produced (about 441 million), according to figures from the Texas Water Development Board and the Railroad Commission of Texas, the state’s oil and gas regulator.

The UT study, published in January, found that the amount of water used statewide for fracking more than doubled between 2008 and 2011. The amount is expected to increase before leveling off in the 2020s. The study’s lead author, Jean-Philippe Nicot of the University of Texas, has calculated that in 2011, nearly a quarter of the water used in Dimmit County went toward fracking. He projects that the figure will rise to about a third in a few years.

Often landowners sell groundwater to frackers. Water for fracking may sell for 35 to 50 cents a barrel, according to the Texas Water Recycling Association, a new nonprofit advocating for the water recycling industry.

Because of ambiguities in state law, local groundwater authorities differ in whether they require companies to get permits for water wells drilled to supply frackers. Legislation filed this session, Senate Bill 873, would fix the ambiguities and most likely result in increased requirements for permits.

The water demands of hydraulic fracturing contribute to another problem in oil country: wear and tear on roads. Each fracking job may need hundreds of trips by trucks bringing water to the site. The trucks also carry water away from the site. That is because roughly a quarter of the water used in fracking comes back up along with the oil or gas. Additional water, found underground near the oil, also comes up. That “produced water” must also be hauled away.

The chemical and mineral-laced water left over after a fracking job normally goes to a disposal well, where it is injected thousands of feet into the earth. But disposal wells are controversial because people living near them often object to the truck traffic and fear that the wells could contaminate the water supply. The Railroad Commission appears likely to tighten its rules on disposal well construction.

More companies are experimenting with the use of brackish water, an abundant underground resource in Texas. The water contains more salts than freshwater does. It may also contain other elements like boron, which can harm the drilling process, and the reservoirs may be deeper and more expensive to tap.

In testimony last month, Stephen Jester, an engineer with ConocoPhillips, told lawmakers that drilling a deep well in the Eagle Ford Shale region could cost $1 million, versus perhaps $70, 000 or $80, 000 for a shallower well.

A few companies have branched into water-free fracking. Gasfrac, a Canadian company that uses propane rather than water in fracking, drilled a well last month on a Dimmit County property adjacent to Fitzsimons’ land.

Another alternative that has drawn increasing interest is recycling. One initiative involves recycling city sewage water for use in oil fields. Alpha Reclaim Technology, a year-old company based in Bryan, is buying treated effluent from Karnes City and other municipalities in the Eagle Ford Shale. Last week it made its first effluent sale to an oil fracker, said Jeremy Osborne, its general counsel.

Other companies are creating mobile recycling units to clean water that comes from oil and gas wells and reuse it for fracking. The Railroad Commission is working on rules aimed at making it easier to do this type of recycling. It is expected to take a final vote on the changes this month.

Some have big dreams for technology. “Sometime in the future, the oil and gas industry could even be a net producer of water rather than a net user, ” David Porter, a commissioner, said in an interview in January.

Texas Tribune donors or members may be quoted or mentioned in our stories, or may be the subject of them. For a complete list of contributors, click here.