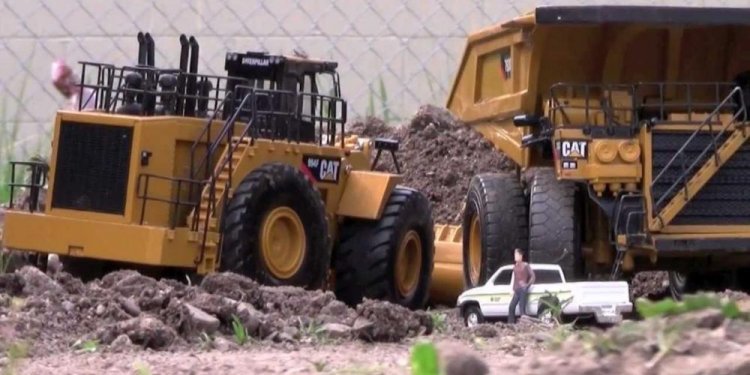 How to operate a Front end Loader?

Check out the machine you're going to operate. There are two obvious reasons for doing this: one is so you're familiar with the machine, and the other is to make sure it is suitable for the job. Read the operator's manual of the machine you will operate. There are substantial differences in backhoes, from the location of controls to the actual cranking procedure and the gauge cluster location. Obviously, this article is general in nature and doesn't cover every make and model of backhoes; each backhoe has its own features with which you should be familiar. Climb up on the machine you have chosen. Sit down in the seat, buckle the seat belt, and take a long, slow look around to see what the clearances of the different different parts of the machine are, and where the various controls are located. Avoid dry runs on the controls, as many parts may move when levers or controls are moved, even if the engine is not running.

Release the parking brake, and shift the transmission into forward, then drive it slowly around while you get the hang of steering and braking the machine. Running in low or second gear while practice driving the machine is a good idea; even experienced operators only use third or high gear on very smooth, flat surfaces, since the balance of the machine makes it difficult to steer at high speeds.

Raise and lower the front end loader bucket (if equipped) to get the feel of it. The control lever for this attachment is located on the operator's left while sitting facing forward.

Pulling straight toward the rear raises the bucket, pushing straight forward lowers it, pulling it toward the center of the machine scoops, and pushing outward dumps it.

Make sure you have plenty of clearance both to the rear and the sides of the machine, since the boom swings left and right 180 degrees, and has a reach of up to 18 feet (5.4 meters).

Set the throttle to rev the engine to about 850 Rotations Per Minute (not too fast until you get the hang of the controls).

Lower the stabilizers until they raise the rear of the tractor so the back wheels no longer touch the ground, then lower the front bucket to its limit, raising the front wheels also. You may find you have to lower one stabilizer further than the other to level the rear of the machine, depending on whether you're on a slope, or if the soil is less stable on one side than the other.

Unlock the back boom. Do this by pulling forward (toward you, and the front of the tractor) on the left control lever, then pushing if away from you when it pauses at the highest point, while holding the unlocking lever (usually on the right floor board) with your foot.

Push the left lever further outward after the boom is unlocked to lower the main boom, or nearest section of the backhoe boom. Push outward on the right lever to extend the lower boom (outer section, with the bucket attached) away from you (this will actually raise the second boom) so that the bucket is extending outward.

Raise the boom with the left control arm by pulling it. Usually you raise the bucket with the right control by swinging it to your left to keep it filled while you lift it from the hole.

How to Operate a Wheel Loader?

How to operate a Snow plow?

How to operate a road Grader?