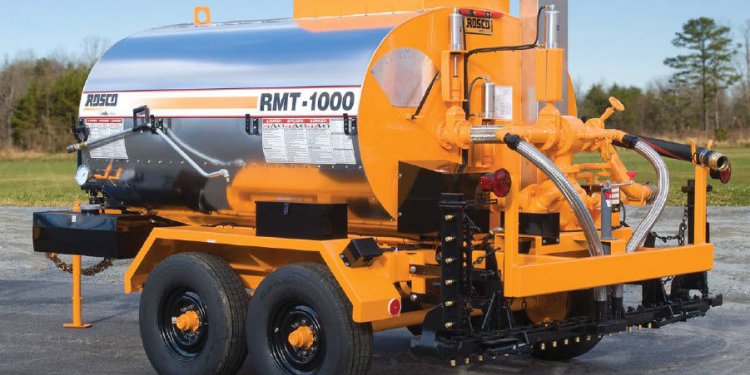 The major components are:

The inspectors should record the serial number and model of the asphalt distributor and enter this information in the project folder.

The asphalt distributor tanks vary in size. Those used for most seal coat work hold from 1000 to 2000 gallons of asphalt binder. Some tanks may be larger or smaller, but this range is adequate for most jobs. The tank is insulated to prevent the asphalt from cooling too quickly. Asphalt cement temperatures for seal coat work are commonly well over 300°F. If the tanks were not well insulated, the asphalt would cool quickly near the skin of the tank and could harden to unworkable levels.

The tank unit should be visually inspected inside before it is filled. It should be clean to prevent contamination or mixing of different types of asphalt. Extreme caution should be used to avoid chemical or physical reactions that can occur when different asphalt binders are inadvertently used in the same tank.

The heater unit should be checked for proper starting and operation. Each burner should operate independently to allow either one to be used alone or simultaneously. The burner flames must be adjustable to regulate the amount of heat being directed into the flues. The fuel lines and burners should be free of fuel leaks.

Baffle Plates and Flues. The inside of the tank contains two or three baffle plates to stabilize the load while in motion. This is especially critical where a constant spray pressure is necessary. The tank has either one or two flues or heat ducts running lengthwise of the tank. These flues allow heat to be conducted into the center of the tank. In spite of the insulation in the tank, some heat loss is inevitable. By use of a burner system in combination with recirculation within the tank, the asphalt can be heated uniformly. Figure 7-4 shows the baffles and flues running through the asphalt tank.

Figure 7-4. Illustration of Baffles and Flues Inside Distributor Tank.

Thermometer. The tank should be equipped with a thermometer. The thermometer should have a range from below 100°F to at least 400°F. Many models have a mercury thermometer mounted in a well in the side of the tank. It should have a chain to prevent it from being dropped and a screw-on cap to keep the well covered. Some models of distributors use a dial-type thermometer mounted outside the tank. These use a thermocouple that is mounted inside the tank. Both types of thermometers are acceptable and should be checked for accuracy. Infrared thermometers can be used to verify asphalt temperature. Another verification technique is to obtain a sample of the asphalt from the distributor and check with a separate thermometer. Figure 7-5 shows the tank thermometer being removed for taking a temperature reading.

Manhole. At the top of the tank is an opening commonly called a manhole. It has a heavy, hinged lid with a fastener. The manhole is used in filling the tank and permits visual inspection of the tank and its contents. The manhole is also opened to measure the amount of asphalt in the tank using a calibrated strap stick. The measuring process is called “strapping the tank” and will be described in detail in Seal Coat/Surface Treatment Application Process. Figure 7-6 shows the manhole cover from the top of the tank.

Vent. All asphalt distributor tanks are equipped with a vent. The location of the vent will vary according to the manufacturer. Care should be taken to ensure that the distributor is always parked where there is adequate crosswind to prevent an accumulation of fumes (from the vent) to come in contact with the burner flame.

Asphalt temperature is a critical factor in the success of a seal coat/surface treatment. To maintain a constant temperature, a proper heating system is necessary.

Burners. Depending on the make and size of the distributor, either one or two propane or diesel fired burners are used. The burners are mounted on the platform at the rear of the tank and are positioned so the flame is directed into the flues that pass through the tank. Figure 7-7 shows a typical configuration.