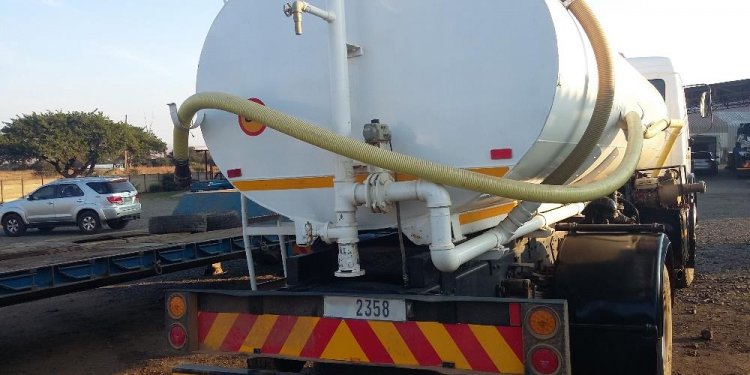 Neeley Keeney is a popular guy in the San Joaquin Valley: He runs a water delivery service and is working seven days a week to keep up with a booming business in the drought-parched region.

"I used to do the construction business but totally quit that, " said Keeney, co-owner of NRK Services in Sanger, California. "Now I'm all potable water and selling to residents, and business is the best it's ever been."

Keeney regularly fills up his 2, 500-gallon water tank truck from a city-owned fire hydrant in Clovis, a city northeast of Fresno. He charges customers $200 to $500 for a truckload of water, delivered, and the cost he pays for the water is a mere "five bucks to load."

Last week, California Gov. Jerry Brown announced the state's first-ever mandatory water restrictions, in a bid to reduce water usage by 25 percent in cities and towns across the state. It comes as Central Valley cities such as Clovis are finding water supplies tougher to find.

"It's really bad, " said Lisa Koehn, assistant director of public utilities for Clovis. "Four years, it just kind of builds on itself. We will have to buy some water this year, and we've never had to do that."

The city of Clovis is considering cutting off the flow to trucks that deliver water to outlying areas. Such a move could be devastating for Central Valley residents that now rely on water trucks for essential needs such as cooking, showering, toilets and the like.

"They are my lifeline, " said Peter Hammar, who lives on a 2½-acre parcel just outside Clovis. His home water well dried up nearly a year ago. "To even think they can cut us off for no good reason at all, while they're running water down the street every other morning, is beyond monstrous."

Clovis officials say they don't make any money from the water trucks, and they concede the way it works might be controversial as the number of out-of-city people getting water from the trucks grows during the worsening drought.

"It hasn't been a huge issue until recently, " said Koehn. "We see it's growing—the number of people who want to do that. We'll probably be discussing with City Council whether we want to do anything for people who are using it for outside the city."

The typical load for a single water truck ranges from 3, 500 to 5, 000 gallons, which is "pretty small in the scheme of things, " said Koehn. However, she added that "all the water is valuable."

On average, Hammar spends $200 a month for 5, 000 gallons of water trucked to his home from the Clovis city hydrants. He's part of about 400 rural properties on the northern edge of Clovis that depend on the deliveries since water wells have started going dry in the area.

Hammar said he has no plans to spend the money it might take to dig a new well on his property. "It's time to give up on wells—unless you're a millionaire, " he said.

With California's drought entering its fourth year, the aquifers that supply water are dropping and getting saltier in parts of the Central Valley, where a huge portion of the fruits, nuts and produce sold in the United States are grown.

"From the start of the drought to now it's dropped about 200 feet in some areas, " said Jay Shaw, co-owner of National Groundwater Surveyor in Clovis. "We haven't seen anything like this. It's getting ridiculous."

Data reported by the U.S. House Committee on Natural Resources indicate that California grows almost all of America's domestically produced almonds, olives, garlic, plums, broccoli and canned tomatoes. It produces the vast majority of the country's lemons, lettuce, spinach, cauliflower and carrots. It accounts for a fifth of the nation's milk and a quarter of its rice.

Shaw runs a business that helps farmers and residents find groundwater, and he currently has a waiting list of "28 days out" for appointments. He said the average groundwater tests cost $1, 600 for domestic customers, and $3, 500 or more for agricultural customers.

"We used to be able to go out and do a minimum of 10 tests and find the results we need, " said Shaw. "Now we're doing 20, 30, 40 tests. It just gets harder to find because it gets deeper and some of the aquifers that have been supplying water are drying up."

That said, there's a yearlong waiting list to get a water well drilled. Some major agriculture counties of the Central Valley have seen a record number of well permits issued in the last year. In Tulare County, for example, the pace of filings for new wells or plans to deepen existing wells is on track to double the year-earlier tally.

"That gives us pause for concern, " said John Lollis, city manager of Porterville, a community located in Tulare County. "With more straws in the glass, if you will, it does a lot for overdraft."

Meanwhile, there are some areas of Tulare County where residents have no water and must use portable showers and sinks supplied by the local county's Office of Emergency Services. The hardest hit areas are east and west of Porterville, including the towns of Lindsay, Tonyville, and Poplar-Cotton Center.