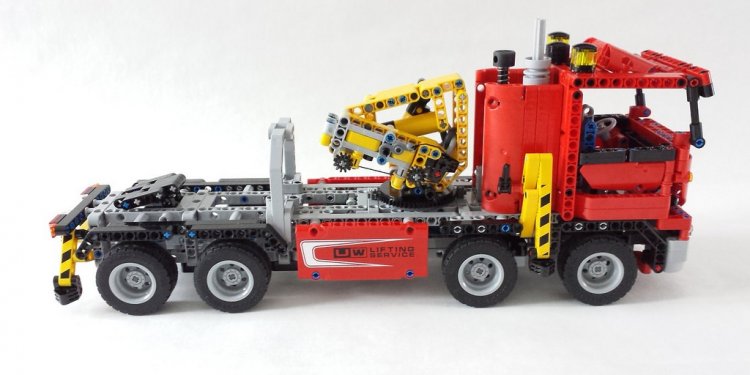 Among all the dust being (rightfully) spread these days around the massive new Unimog, it's difficult to focus on other Technic trucks. But I will actually do a little flashback and take a look at the slightly older, but not much less fascinating 8258, which I've had my sights on for some time already.

Huge, at over 3, 5 kg and 1877 parts (only a few percent less than Unimog's 2035 and at the same level as the 8421), it is undoubtedly among the flagships. And as you would imagine, almost two thousand parts imply quite a lot of functionality cramped in the generous volume a truck offers. Just like most real-world trucks, its cabin tilts to reveal an engine ― a V8 in this case, connected to the 3rd pair of wheels. Two front wheel pairs are steered (the front pair steering more than the 2nd, just as it should) through a HoG cylinder on the top. The cabin is just decorational, there's unfortunately not much to control about it, beside adjustable mirrors.

But again, the crane is a masterpiece of Lego engineering. It can be rotated and its two arms independently tilted, all with a XL motor, two large linear actuators and a couple of gearbox parts. Thanks to a clever coaxial drive inside the turntable, relying on transmission rings and extenders, the crane can rotate without limits in either direction. Great design ― tight and efficient. The last arm of the crane can be extended, and the rope with a hook spooled manually; controlling even those functions with a motor in the chassis would be just too much. A manual ratchet locks the rope and prevents it to unwind under heavy load. The fourth function of the motor is to extend or retract two pairs of outriggers ― their ends are manually opened or closed, and have quite a reach and enough sturdiness to carry the entire vehicle and its load. And it's worth mentioning that the battery pack is very easily replaced; one does not need to break open half of the bodywork.

Looks are "standard" for this class of models: nicely shaped contours using the panels and Technic plates, with a few details such as the exhaust pipe, lights and horns. Just sufficient not to obscure the mechanics inside, but altogether, well judged.

Mechanically, it's brilliant and a great lesson (especially the complex crane), but actually not devoid of flaws. I've found two; neither of them is too critical, but they need to be addressed. First, the steering system could have been a bit stronger, or been geared down a bit more. It is easy to steer while driving the truck, but while stationary it puts parts under some strain, as there are four large tyres to rotate, all very grippy under the weight of the truck. Second and more important, despite the truck having three clutch gears to prevent damage when the movements get blocked, it is not always on them that the system gives: often some other gear will skip and crackle, opening the way for some gear wear. Perhaps the final stages are just geared down a tiny bit too much.

But regardless, if you're asking me whether this is a good value for money, it certainly is. It's not the Unimog, but it offers almost just as much, while it can be found today for significantly lower price. Especially if you're aiming at building material, and not just the excitement of having something that came fresh from the factory.

As said, the mechanical ideas (especially the coaxial drives in the base of the crane) are great, and something one should add to his lexicon of Lego tricks. And, predictably, it's not the easiest to build: often you will connect large modules in a delicate way, have to synchronize gears, find the choreography to fit one part inside the other, etc. Nothing scary, especially if you're experienced, but it requires some patience (in my case, about 6 and a half hours of patience).

Besides, the parts structure of 8258 is somewhat... unusual. Some typical Technic parts are used very scarcely, which probably reflect Uwe Wabra's building style and preference (he designed the model). For instance, there are unusually few half-width beams, and lots of linear actuator holders that are employed for something else instead. Inconventional, but effective ― and that's what counts, after all.

What needs to be said after the starter fact that it's got slightly shy of 2000 parts? Tons, tons and megatons of standard Technic building material in red, black, yellow and grey, including some valuable parts: PF battery pack, switch and XL motor, eight nice truck wheels, three clutch gears, and two large linear actuators. Also the panels, triangular, round and flat, are particularly useful. As mentioned before, some classes of parts are almost missing, but that doesn't mean this is not a good addition to your inventory.

Absolutely. It is a great modular platform, and could be easily rebuild to accomodate some other machinery instead of the crane, redesign the cabin or add a full-size trailer. The power pack is there, so there could be some more power functions added, and even converting it into a car-transporter or something of the kind shouldn't be a problem.